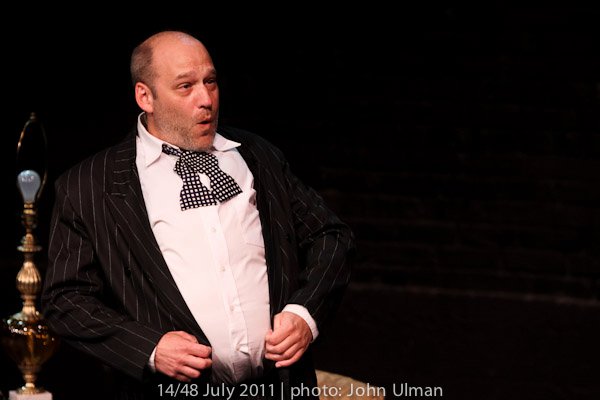 I got to play a stooge, brilliantly written by Eric Lane Barnes. Now it’s time to stop.

Ugh. So. Ellen and I decided to have a writing night. She’s writing. So far, I haven’t. I felt like my brain was in a good place to write, but I kept overthinking shit. Over periodic cigarettes, I’d start writing things in my head. Bad, bad, bad. I do some of my best work-related thinking while smoking—code that’s been plaguing me will suddenly come clear. But writing-related thinking? Not so much. In the categorization of writers as slashers and bashers, I am indisputably a slasher. I cannot edit while I’m writing (at least not much). I have to let the shit hit the page as fast as possible, or I will overwrite the hell out of everything, and it will suck great big donkey balls. And… and this is the worst part… and if I let myself think too much about the writing, I will also be overcome by the knowledge that it will suck great big donkey balls.

Almost a couple decades ago, when I was writing a lot without any thought toward getting published, I took a bit of advice from one of Natalie Goldberg’s books about letting one’s internal editor have his say on the page: if your internal editor is telling you that you suck, write that down. My internal editor’s voice, when transferred to the page, happened to sound a lot like Ross Perot. Cracked me the hell up every time I wrote down his “What the hell, son? Dad gum it, you can’t write that,” etc. It made it a hell of a lot easier to dismiss this voice, since it was so insanely moronic. Maybe I need to invite that little sumbitch back in again. Just write his idiocy and let that particular bit of writing be part of the necessary shit pile.

So… good. Okay. I’m just writing down a bunch of words as they occur to me. Good. “Law & Order: Los Angeles” starts in about seven minutes, though (if we remember our teevee schedules correctly), so we’re going to go in and watch that. So. I won’t be getting to “real” writing tonight. Hell, this isn’t even of much value as a blog post.

But here’s what I was thinking of when I sat down to start writing in this here WordPress window: that whole question of how improv affects my writing. I still don’t know. I’m not writing anything other than a blog post. In theory, it should be helping me to slash away, and toss away the inevitable detritus. But here’s what I did this weekend just past (on night one, I played Curly Howard; on night two, I played a weasel, an old goat, and a German Shepard mix). And I was thinking: maybe because I got to perform two god-damned AMAZING scripts this weekend, both of which were written overnight… maybe because of that, I’m letting myself be intimidated by other people’s really, really, really good writing. (I plan to write more about 14/48 soon.)

But as I sit here typing this out, I know that’s bullshit. Not bullshit that they were amazing—they were. Holy shit, they were. Bullshit that I’m intimidated. Truth is, I’m totally inspired in just about every working neuron. Bullshit, because I’m allowing myself to be a) lazy, and b) intimidated by my own internal editor. The first pisses me off because: fuck you, Dave, stop being lazy. The second pisses me off because: fuck you, Dave, you know that little Ross Perot inside is an idiot.