The inspiration of festivals (Part 3) 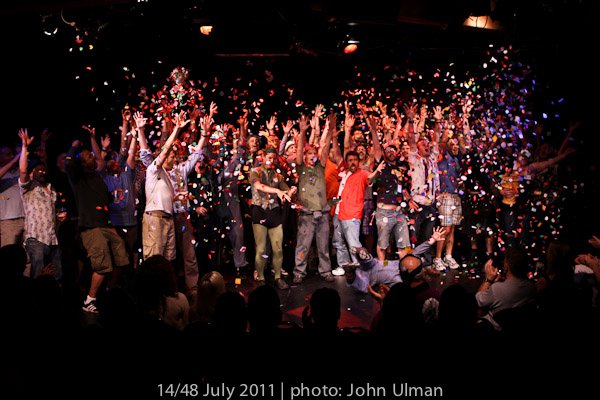 On to Day 2, and hopefully wrapping this whole thing up.

Got to the theater a couple minutes late again on Saturday, this time with costume pile left in the car (still in the car, actually; I need to clean it out before picking up my kids tonight). Directors are drawing, and I hear John Farrage directing a play by Scott Augustson, and I’m thinking, “Me, me, me!” I’ve heard about John for years–he was a classmate of Stephanie Roberts at Cornish, and she talked about his work frequently. Scott Augustson writes these brilliantly weird and wonderful plays that have been a marvel of 14/48’s past, as well as the Seattle fringe scene in general. Sure enough, the 14/48 gods smile on me again: John draws Ashley Bagwell, Agastya Kohli, Erik Van Beuzekom, and me.

We head upstairs to our designated rehearsal space. John tells us we should read the script to ourselves first, as it’s an odd one. We do. We can all tell where each other are in reading, as we laugh at various lines. John assigns roles: Agastaya will play the straight man part, a man whose wife has died unexpectedly; Erik will play the doctor, a swan, and a lobster (later changed to jellyfish); Ashley will play the orderly/bear and a bird hustler; I will play a weasel, an old goat, and a German Shepard mix.

And off we go. Day two is much looser. Maybe because we’re all tired, so our energy is a bit lower. Maybe because we’ve gotten through it once already, so the nerves aren’t as intense. But it’s a good day. John is as good as advertised, and understands that his usual directorial style of delving deeply isn’t best for the format–choices have to be made fast. It’s more about tweaking the first choices made than about building something over a longer period of time. And Scott’s play is beautiful–poignant, hilarious, and acid-trippy, sort of an adult Alice in Wonderland. And Agastya, Kaleb, and Erik are great. The day passes almost leisurely. Lines don’t seem quite as tough. More side conversations during breaks. Erik and I talk about Andy White and Lookingglass Theatre, and Erik’s work with Andy’s dad. John and I talk about Stephanie, and Brendan Fraser, another classmate of theirs, and John’s roommate in LA. Andrew McMasters and I talk about 14/48 and the lessons SFIT could learn from it. Annie Jantzer saves my ass (and my voice) with shots of whiskey before each show. Ashley has horrible nerves (and gets over them beautifully in performance) about his very revealing costume. And so many, many other side conversations during various breaks and between shows later. And watching various casts, as they go over their lines that one last time, just losing their shit punch-drunk laughing, enjoying their time working together.

Really, day two, in many ways, was a lucid dream. Sure, maybe some of that had to do with the dream-like style of the script. But more, I think it had to do with a whole lot of amazing artists enjoying the hell out of working together. And the shows! Oh, man, the shows on Saturday were all wonderful, and in so many different ways. I don’t think any of us will ever forget Tim Gouran bolting through the audience as a pre-cum sperm, or Erin Fetridge voicing from the booth the moans that set him off. Or the confetti-throwing ending of the prison musical that closed the show.

Or the party afterward, where the men of 14/48’s Men’s Weekend finally got to interact with women.

Dudes. Duuuuuuuudes. It was all so, so good. I am inspired. And it didn’t take as big a toll on me physically as I thought it would. My voice is completely back. And I’m mostly well-rested (although I did need one sick day in the middle of the week, and slept a ridiculous number of hours on Sunday). Thank you, steering committee, for running this wonder, for mandating that 25% of every festival’s participants will be “virgins,” and for allowing me to be one of that 25%.

I want to write more about lessons learned from 14/48 and how that can apply to other festivals. There’s talk of bringing the fringe festival back. And SFIT looms with both the problem and the opportunity of not having their usual second venue (Market Theater) available. And 14/48 offers a lot to learn. So I’ll circle back around to that at some point. But right now?

Dudes. I love you, dudes.