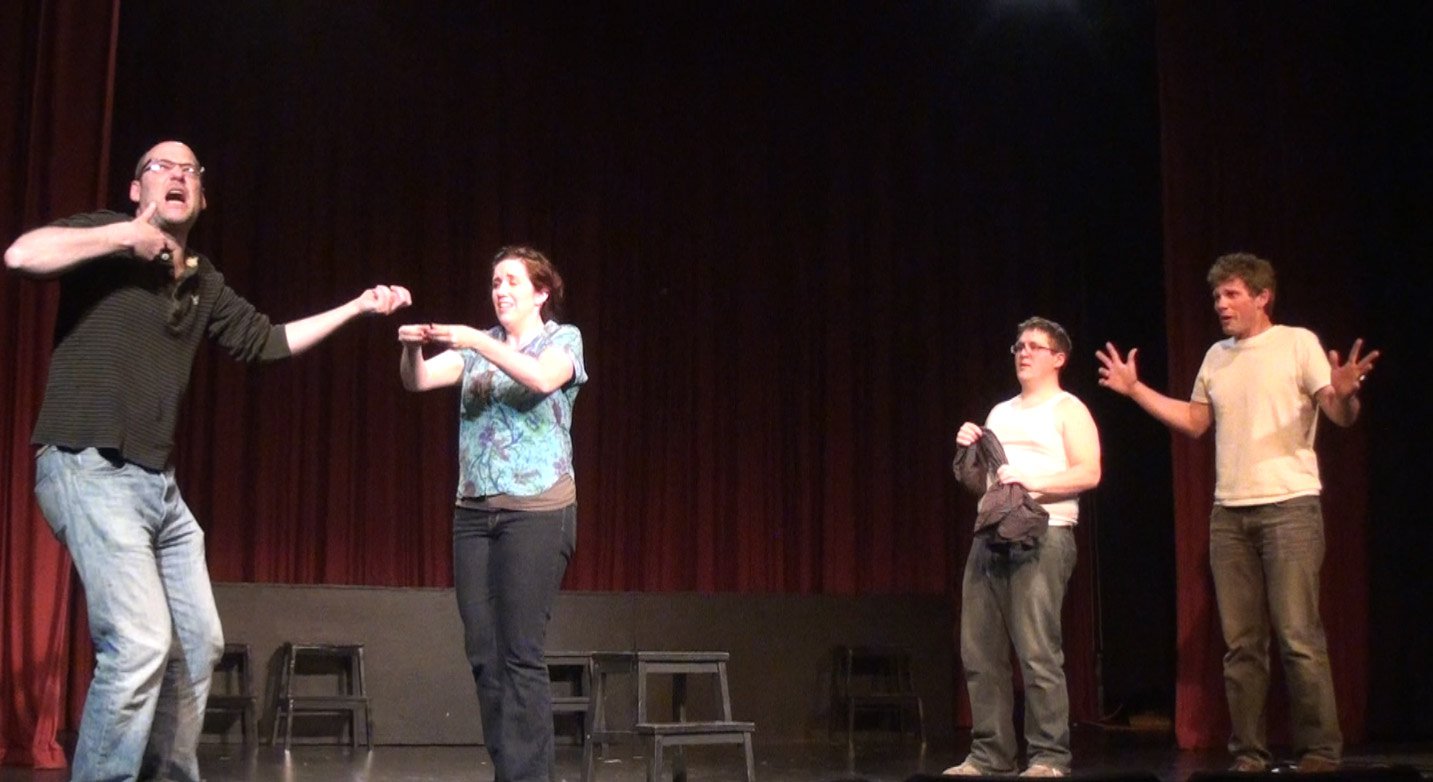 One of the things that I adore about Interrobang is that we regularly issue challenges, both to ourselves and to others in the group, in an effort to expand all of our tool kits. For example, in one of our “Last Call” performances at Wing-It, Shira played almost exclusively low-status characters. In her next performance, her challenge to herself was to play only high-status characters. Where, in one performance, a typical character had been a very submissive Mrs. Noah, in the next performance, in a scene between two cheesy music addicts, she was the one who beat up the other character and stole his Barry Manilow collection.

The example I’ll give for myself is to stop committing suicide in scenes (at least for a little while). While I don’t think there’s anything wrong with a character killing himself in a scene (if it’s justified and advances the scene), the fact that characters I played in both of those “Last Call” performances killed themselves suggests to me that it’s become too much of a go-to. (And even after noticing that, and putting in my mind that my next self-challenge at “Last Call” would be to not kill myself, I wound up doing exactly that in a performance of “Criminal Improv Unit.”)

So… here were the three scenes:

1) Noah (played in the style of Robert Shaw in “Jaws”) has taken two of each creature onto his ark, as God has commanded. In one scene, he walks in to find his wife flirting with another man. He walks offstage to get a rifle, comes back on, and levels the rifle at the interloper, saying, “Smile, you son of a bitch.” In the time that he’s been offstage, another man has come on. Faced with two men taking his place with his wife, he screams up to God that while he’d agreed to two of everything, he hadn’t realized that God had meant two adulterers as well, curses God, and turns the rifle on himself. Justifiable, and a great reaction from the audience (getting an audience to audibly express sadness reacting to an improv scene, for me, is in some ways, even more satisfying than getting them to laugh).

2) Low-status cheesy music nerd changes the locks on his own house to keep high-status cheesy music bully from stealing any more of his stuff. He breaks into his own place and sets the needle down on a newly purchased, rare Manilow LP. Bully comes in and takes it from him, and also reminds him that she killed his cat (cats were a big part of the overarching theme of the show). Sobbing, he goes to his closet, pulls out his taxidermied cat, retracts its claws, and rakes them across his jugular. Again, totally justified, and it led to the rest of the cast coming on as cats, trying to nudge him back to life, then labeling an audience member in the front row (whom we had been singling out throughout the show) as inheriting his soul. As they purr all over her, corpse starts singing “Mandy,” and the cats all join in. End of show (and a great pull by Steven in the booth to bring “Mandy” up for our bows).

3) Lawyer, who is a prime suspect in a murder, is cornered in interrogation. It’s clear he’s going to jail for a long time, based on the fact that he’s smuggled heroin in his clients who are being deported to Ireland (a gang of Seattle Irish, whose names are all Johnny Walker). He pulls a gun (ah, police procedurals!) that the detectives didn’t think to search him for prior to bringing them in. The detectives pull their guns–Mexican stand-off.  They try to get the information from him as to who actually killed the victim, and he tells them that they’ll have to figure out for themselves and turns the gun on himself. Possibly the least justifiable of the three scenes (especially after telling myself, in a different context, to NOT do this), although totally fitting the trope of characters in shows like “CSI” and “Law & Order” ending their own lives rather than facing justice. Also fit into the format of the show of introducing red herrings and dismissing them before the detectives find the actual perp.

None of those, in isolation, are necessarily “bad improv.” They all worked in the context of the shows in which they appeared. But I think that one of the surest ways to stop improving as an improviser is to return too often to something “because it worked.” Where would any of those scenes gone, for example, if the characters hadn’t killed themselves? Might Noah have had to cede some of the status in the relationship with his wife? Maybe the music nerd finally has enough and turns the tables on his tormentor? Could the lawyer have revealed more information about the actual perp, leading the detectives in a different direction? No way to know now.

In general, I believe that if you have any fear about where a scene is going in improv, that needs to be explored. It might not make for the best performance in that specific case, but whatever’s learned from pursuing the more difficult direction is something that’s going to make future performances better.

Johnstone would probably disagree: “The improviser has to realize that the more obvious he is, the more original he appears. I constantly point out how much the audience like someone who is direct, and how they always laugh with pleasure at a really ‘obvious’ idea.” And I think that’s true… mostly. But if the obvious continues to take the individual improviser to the same choice, over and over, how does the improviser continue to grow? Remember when everyone thought Robin Williams was a brilliant improviser? Until they saw him repeatedly and realized that he continually resorted to the same bag of tricks? Yes, the first time the audience sees that, they love it. Until they see it again. And again. And again.

So… while the specific example I used here is about characters killing themselves, my larger point is that it’s important to challenge ourselves to continue pushing in other directions. I’ve found a bit that kills the audience every time? Great, that’s one of my tools. But if I stop there, if that’s the only tool I pull out, I’m limiting myself. That’s as good as I’m going to get. Time to challenge myself to do something besides what I know works.