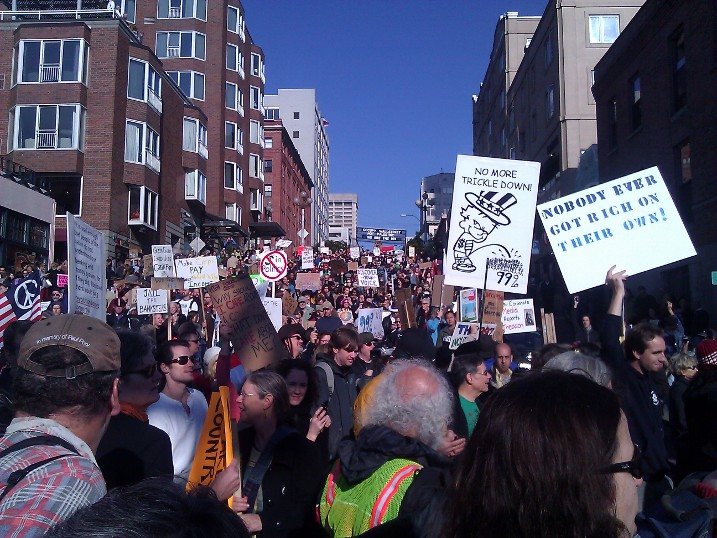 Whose stage? Our stage!

This post, while not wildly political, will hopefully be the most political I get in this space. It’s not that I’m dispassionate about politics—quite the contrary: when diving too deeply, I get highly emotional and occasionally irrational. Rather, it’s precisely because of that occasional irrationality that I’d prefer to keep my politics on the sidelines here.

(Side note here: I’m also terrible about remembering to promote things as they’re coming up, so I made a couple tweaks to the sidebar over there. Calendar of events and Twitter feed are both there. If you want to see me more uncensored, catch me when I’m drunk on Twitter, which hasn’t happened since the creation of the new account, but likely will at some point.)

That said, the passion exhibited in the Occupy Wall Street protests mesh neatly with something I’ve been wanting to write about for a while: how we inhabit our performance spaces. This goes along neatly with the discussion of passion in If you don’t have fun… (Christ, that was almost a month ago… I’m a shitty updater), and, in fact, the reasons behind this post mostly arose from thoughts in that post put into action in improv since then. Primarily, the thoughts have been in action while running the monthly mash-up, during rehearsals, and in the one Interrobang show so far this month that I was in.

Starting with mash-up and the two rehearsals that I ran… one of the things that Asaf Ronen talks about in his excellent book, Directing Improv: Show the Way by Getting Out of the Way, is introducing oneself at the beginning of a class. He says to give your credentials and briefly lay out the purpose of the class, and establishing your authority on the subject matter. This isn’t meant to be authoritarian; rather, it’s meant to illustrate that the people taking the class are safe, that you know what you’re doing. I’ve always been uncomfortable with this, largely because, when I’ve taught or directed or run mash-ups, the people there have been my peers. Consequently, my introductions were always wishy-washy, kind of “Hey, we’re going to maybe do this, unless someone else has a better idea.” Which is just terrible energy to get things going. So I changed up my approach for both rehearsals and mash-up.

In rehearsals, I stated up front what the foci of the rehearsals were to be, then ran exercises, then show runs. (At some point, I’d like to delve more into directorial/professorial styles within rehearsals/classes, as I got a ton out of a conversation with Ian Schempp about this, and it played a large part in what made the rehearsals successful, but I think that’s for another post.) For the mash-up, I introduced myself, gave a very brief synopsis of my improv experience in town, a quick history of the mash-ups, how the mash-up would run, and a simple challenge for anyone who wanted to accept it (“tonight, at least once, play a character you’ve never played before”).

The difference between those rehearsals and previous rehearsals I conducted, and even more glaringly, between that mash-up and previous mash-ups, was enormous. The rehearsals featured a lot of great, funny work, and the mash-up was, by far, the best we’ve had yet (kudos to the members of Adina Gillett’s Performance Series class, many of whom were attending their first mash-up; they were fantastic). Taking charge from the outset sets an energy that everyone else can feed on. It makes for an environment in which people spend more time playing and less time discussing how to play. They’ve already been told how to play. (And, in the case of Interrobang, if they don’t like how the play is set up that night, they have an opportunity to set the parameters themselves in future rehearsals.)

All of the above goes equally for hosting shows. One weakness I think Interrobang has had in the past is the lack of a strong opening. I think that’s derived largely from issues similar to the ones I stated above about directing peers, a feeling of “Who are we to tell the audience how to act?” We typically went to getting our suggestion right away, without getting the audience acclimated to the space. We didn’t set their expectations and make them feel safe. Contrast that wishy-washy energy with how Kai opened our last show: he came out, greeted the audience, then directed them in “We Will Rock You” sort of chant of “Interr, Interr, obang.” That set the energy. He then asked them to close their eyes, picture a lovely spring day in which everything was wonderful, but there was something in the back of their head nagging at them. What was that thing? Quickest suggestion we’ve ever gotten. Excellent.

Something else we discovered in our first Odd Duck show of the month was that where we spend our offstage time matters. A lot. Odd Duck currently has essentially three potential entrance/exit points, two of them virtually blind: a curtain downstage right, another curtain upstage left, and an aisle out of the theater downstage right. Behind those curtains, it’s almost impossible to see what’s happening onstage. Consequently, it’s much, much more difficult to establish the group mind so imperative in group improv. In our second show, cast members not in scene stayed on stage (they’re not visible in this clip, but they’re all in front of the curtain upstage right).

Also, during rehearsals, Randy focused heavily on our energy when out of scene. What’s our body language? Are we always ready to jump in? Where is our focus? What’s our body language? In one exercise, if he saw one of us on the back line losing focus, he actually made a buzzer sound. Just as in sports, improv has a ready position. If you’re focused in on the scene, with energy, even while offstage, the chances for you’re having a good show are increased a ton.

Finally, there’s the issue of the energy one has while in scene. I don’t want to harp on this too much right now, because I think it, too, might warrant its own post, but I can’t count the number of times in improv when I’ve seen people in scenes disengaged from their scene partners. By this, I don’t mean that their character is disengaged from their scene partners’ characters—that’s a perfectly valid choice. Rather, the body language and facial expression that makes it clear the improviser is thinking about where (s)he wants the scene to go, rather than being fully in the scene. Yeah… that’s a much bigger topic. Will delve into that more fully later.

Bleah… for a post about passion in how we occupy our improv space, this post feels horribly dispassionate. Which is a non-improv struggle I’m having with this blog: I have about a million different things I want to talk about, and often get hung up trying to be at all cohesive. Might be time to drunk tweet about improv.

(And if you’re just dying to know my politics, I took the pic above while walking with my partner and kids in an Occupy Seattle march on Chase Bank. I’m a little to the left of Bernie Sanders.)