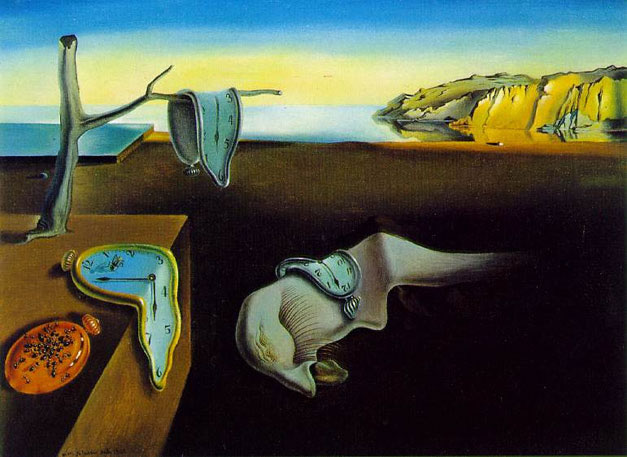 Salvador Dali’s mustache took 10,00 hours to grow, which is why it’s perfect.

When I started doing improv again in 2009, I said “yes” to everything: every open play time, any class, any performance (although those didn’t come right away). I continued to say “yes” to every invitation for two years, especially to improv performances, regardless of whether I thought it would be a good show or not. And, where invitations didn’t exist, I created my own, whether inviting other improvisers to play someplace or assembling an ongoing group. (Note to new improvisers who are feeling left out of the casting process, etc.: do this! There are other people in the same position as you who want to play just as much as you do, and space rental, when divided up, is cheap.)

And then, around the time I started this blog, I decided it was time to start saying “no,” to be more selective about what improv I would do, with whom, when, and where. I felt I had to: I was often exhausted, I wasn’t getting to spend as much time at home with my partner as I’d have liked, and, as a result of committing immediately to everything, occasionally had to say “no” to something I’d have been more interested in only because I’d already committed to something else.

I decided, more specifically, to say “no” to everything but Interrobang rehearsals/performances and to starting up the once-a-month mash-ups again, while taking more time away from stages and rehearsal spaces to reflect. And that choice has achieved its goal, mostly: it’s given me much more time at home, which I’ve cherished, and also given me more time to a) reflect on where I’ve been, and b) read a whole lot by other improvisers.

And the biggest revelation? I need to do more. Rehearsing once a week, and performing about twice a month isn’t enough. I still need to figure out a way to balance the need for more improv with the need to be home as much as I’d like, but I definitely feel like I’ve fallen into a holding pattern as far as getting better.

Matt Walsh, of Upright Citizens Brigade, spoke at Wing-It on May 20. One of the things that he said was that it took him ten years to become “good” at improv. And in reading about a lot of Chicago improv history recently, it’s become very clear to me that the groups we’ve all heard of did improv a LOT. I would guess, fairly conservatively, that the norm was around twenty hours a week. Think about that. Twenty hours. That’s not a full-time job, but it’s a pretty serious part-time job. That’s five nights a week, four hours a night. And, when that all gets added up, ten years starts to look a lot like 10,000 hours. 10,000 hours, not coincidentally, is the amount of time Malcom Gladwell discusses as the necessary time to become great at anything in his book, “Outliers” (which, in turn, he got from neurologist Daniel Levitin).

So what does that look like in the world of Seattle improv, where the most strenuous rehearsal process I’ve seen for a show has been three rehearsals a week? The idea of that is so embedded in the culture here that pushing against it draws major resistance from just about every improviser. In fact, when the realization hit me that I needed more improv time, rather than asking the members of Interrobang whether they’d be interested in expanding to two rehearsals a week, I pursued instead the idea of booking more shows. At this point, I’m not overly concerned with whether my improv takes the form of rehearsal, class, or show, and pitching performance time to improvisers is much easier than pitching rehearsal time.

Knowing that, then, how to get to the number of hours needed to become “good?” For a 20-year-old, that’s easy: mix and match enough rehearsals/classes/performances to get in twenty hours a week. In my twenties, I wasn’t doing improv, but my time spent in rehearsals/performances as a more traditional actor was easily twenty hours a week. For a man in his forties who has a rich home life that he doesn’t want to abandon, it’s much more difficult. So how to do it?

Honestly, short of suddenly becoming independently wealthy and being able to make improv my lone “job,” it’s probably not possible. But there are ways to get occasional large spikes of hours, and I think this is where “The inspiration of festivals” posts have inevitably led me.

Last year’s SFIT, over the course of four days, allowed for one regular show performance, an all-star mash-up, a dust-up, and a master class, as well as seeing a TON of amazing improv, which is hugely valuable in and of itself. Total hours over those four days? 25 maybe (if watching shows counts, and I think it should).

14/48, while not improv, provided an even more intense model. Over the course of two days, I figured out that I was in the theater for something like 35 hours (not all of it rehearsing or performing, but most of it).

The 24-hour film race, about a year and a half ago? Pretty much what it sounds like. Over the 24 hours allotted, I think about six of them weren’t spent working on the film.

Each of these, in their own ways, provided massive spikes, not just in hours, but in inspiration. And then were followed fairly immediately by what felt like plateaus: the work was probably better than it had been before those events, but that feeling of rapid progress was gone. In some ways, the work felt like it went backwards immediately afterward, but having had time to reflect on each event, I’ve since realized that the work stayed similar to the level at the end of those events for a while, and it was the lack of new progress that was frustrating.

Where then to get those spikes? There are a few naturally built in, i.e., the three I just mentioned. But looking back to my new beginnings with improv, there were dead times where what I wanted wasn’t available, and I had to create my own opportunities. Might something similar work here?

A few possibilities occur to me:

Bottom line, though, is that 10,000 hours is a ton, particularly for a middle-aged man in an improv culture that already resists putting in a lot of time. But there’s that whole thing of wanting to be good. And being good? Requires work. 10,000 hours of work. And, to this point, between my original time pre-kids and my time since coming back, I’m probably somewhere around 4,000.

I got some work to do.