Take risks, support each other, tell the story. 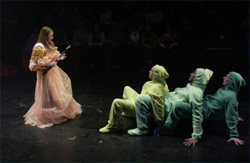 From the 2005 production of Lookingglass Alice

These were the three underlying principles of Lookingglass Theatre that Andrew White cited in his acceptance speech for Lookingglass’s Tony Award for Best Regional Theater (video of the speech here. Now, that may seem like boilerplate stuff, but what doesn’t necessarily come through in those words is the level of commitment Lookingglass gives to those words, and has done for about 25 years now. What I don’t think Andy mentioned in that speech is that the early production to which he refers happened while they were all students at Northwestern University. While I don’t think I saw the production of “Alice” that he cites, I did see others of their productions, “The Serpent” (which I think was the impetus to moving forward as a company), “Still Life with Woodpecker,” and “West.” What struck me in each of these productions were a few things:

1) Holy crap did they take risks. I still have vivid memories of scenes from “The Serpent.”. From a very visual representation of the “begats” section of Genesis (seriously, is there a duller part of the Bible? Until you see actors writhing on stage begetting, that is) to disjointed representations of assassinations to a stylized violence of Cain and Abel unlike anything else I’ve ever seen, I continually found myself with my mouth agape. That I still can visualize those scenes 25+ years later… in editing SmokeLong Quarterly, I’ve often talked about the stories I love being the ones that I can’t stop thinking about months later… I can’t stop thinking about “The Serpent” a quarter of a century later, and most of those thoughts come not so much from the text, but from the level of risk (and reward!) in that particular production.

2) Those risks so obviously wouldn’t have been possible without tremendous support and trust among the actors (and director). Some of the movement literally could have caused tremendous injuries if the partners in those movements hadn’t been absolutely committed to supporting them.

3) They worked their asses off. In truth, I misremembered the third point Andy made as “Work hard,” rather than “Tell the story.” I remember hearing (second-hand) that when Lookingglass played the Edinburgh Fringe in ’87 (as did Mee-Ow) that LG members were discouraged from hanging out with members of Mee-Ow while there. They were all friends, but LG was there to work. Similarly, it often seemed, while they were in rehearsals for shows at NU, they virtually disappeared from the social scene. They still had lives, yes, but their focus was absolutely on the work. While I never got to attend one of their rehearsals, in my imagination, they were focused and intense (in other NU shows, I worked with most of the members of LG, and even individually, their focus was clear).

The Regional Tony, to me, wasn’t so much an accomplishment in and of itself (or something they ever specifically aspired to) as it was the outside world recognizing a quarter century’s worth of very talented people committed to one another and to those three goals.

As we’re getting ready to go into our first auditions for Interrobang, Lookingglass has been much on my mind. When Randy and I first met at Feierabend to discuss our goals in starting an improv group, one of the things I said was that I wanted to commit to working hard, and that this specific goal was counter to much of my early acting history (one director said as much about his experience with a show I did at New Mercury in ’93). I’ve always deeply loved ensemble work in general (and ensemble improv in particular). And, since getting back into improv, I’ve been dying to find a group with which I could grow and make a high level of commitment to supporting and pushing one another to become better individually and as a group.

I think Interrobang is getting there more and more with each rehearsal. The understanding among each of us that we’re not going to play it safe and that we’re going to be right there for each other… that’s awesome. And, somehow, almost instinctively, even in our crazy-ass experimental free-form, we never let the story drop.

So… while I can’t speak for every single member of Interrobang as to what we’re looking for in the auditions, I don’t have to look much beyond Chicago’s “theatre without a net” to voice what I’m hoping to see: take risks, support each other, and (in a slight deviation from Lookingglass’s credo) trust that the story will find itself if you do those things.