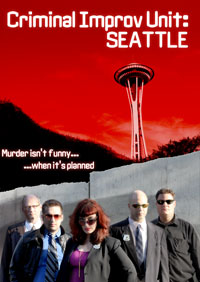 In the few instances that I’ve been in literary situations (interviews, readings) since getting back into improv again, a question I’ve been asked in each case is, “How does improv impact your writing?” I’m not sure I can answer that question well, because I haven’t done much writing at all since jumping back on stage. I can, however, speak to one huge way in which a “rule” of writing has carried over into my improv. It comes from a passage about writing (often misattributed) by Sir Arthur Quiller-Couch:

“Whenever you feel an impulse to perpetrate a piece of exceptionally fine writing, obey it—whole-heartedly—and delete it before sending your manuscript to press. Murder your darlings.”

When I started this blog (a whopping five days ago), there were certain topics that I knew I wanted to tackle, and this was at the top of the list. But I’ve been pretty good about following this advice myself recently, and I didn’t want to call out other improvisers whom I’ve seen forcing their darlings onstage. Fortunately, last night’s performance of “CIU” was a) our best show yet, and b) one in which I murdered a lot of darlings. So I’ll come at this from an angle of something done well, rather than something fucked up (and it is, if not the most common fuck-up I see (and do) in improv, right up there at the top).

So what is the application to improv? When one is out of scene, whether in short-form or long-form, one is still highly engaged with the action onstage. It’s a keen state of observation, of listening, of finding what support a game or more narrative show needs. And when one picks up on a piece of support that would advance the scene in a particularly great way… that is a darling. If the scene allows for it right at that moment, a darling can do amazing things. If, however, something in the scene changes before the darling can be introduced—changes in a way that makes the darling a distraction—murder that darling post-haste. And forget about it. Realize that one of an improviser’s strengths is the capacity to generate new darlings almost constantly.

In the past, when referring to my writing, I often said that 90% of what I wrote was shit. But the 10% that was good couldn’t have existed without having generated the much larger shit pile. That equally applies to improv ideas. To get to the best ideas—or at least best for the specific scene—there has to be a pretty huge shit pile of ideas discarded. For whatever reason, that didn’t occur to me at all when I first jumped back in. As soon as I had an idea, I felt the need to put it into action. And I had a lot of shitty ideas. Or rather, a lot of them probably weren’t bad on first thought, but by the time they were brought into the scenes, they were already obsolete, and took the scenes sideways (if I was lucky) or (more likely) backwards.

So, last night’s show. The cast did stellar work last night, across the board. Dan, as the lead detective, and Tony, as the renegade import cop from Texas, had a great antagonistic relationship. Stephanie and Joel, as the married detectives Dr. Phillips and Dr. Phillips, were awesome. Christina was so amazing in two roles: one as the lab tech Beverly (or was it Everly?), and one as a medical marijuana smoking club manager. Tamara was freaking hilarious as the lab tech Everly (or was it Beverly?) who used yoga techniques to examine corpses in the morgue. Jay… holy crap, Jay… stood our usual format on its head from the very beginning of the show when he deviated from opening the show with a victim scene and instead played a serial killer who was flushing a victim’s body parts down a toilet until he was interrupted by Tiffany, whom he then killed. Stakes? Damn’ straight, stakes. His serial killer, who didn’t speak until he was caught, was brilliantly played, creepy, and funny as hell. Tiffany (who is HILARIOUS) and I were swing players. As it turned out, Tiffany barely spoke at all through the course of the show, instead turning up in various bathrooms as yet more victims for Jay to kill. Which, while not highlighting her own brilliance, were exactly the supports to scenes needed in each instance.

For myself, I played one character, a homeless guy who found Jay’s bloody shirt and tie in a dumpster and started wearing them, and then wound up in the back seat of Dan’s and Tony’s cruiser (offstage) for the rest of the show. My darling murders took place offstage all night. A couple examples: I was in costume as a postal worker, ready to go onstage to be questioned as one of the patrons of the bar where the first murder took place. While in that costume, Jay ditched the bloody shirt and tie. Well, that’s evidence that’s probably more important to follow than someone in a bar who probably didn’t see anything, so darling poster worker got murdered before seeing the stage. The two Dr. Phillipses talked about the profile of the killer, and how he had mommy issues. So I donned a muumuu, glasses, and a wig to play a crazy, old woman. Shortly after, it was revealed that the killer had been abandoned by his mother at an early age. Off went the muumuu, wig, and glasses, as another darling got murdered.

Had I forced the old lady onstage (and I was really enamored with the idea of the character), at best, it would have been a briefly humorous distraction. At worst, it would have forced all the actors onstage to do a lot of justifying of the denial of something already established: that the killer’s mother was not in the picture. And where they went instead—into the drooling madness of Jay alternately withholding and offering the detectives information on the whereabouts of his latest victim—was amazing. And probably couldn’t have happened if I’d forced my darling onstage.

The show was awesome, due almost entirely to everyone else in the cast. They were so, so good last night. And while every actor would like to be part of that creation, sometimes the best way to help the creation be great is to step back and let it happen, to leave a pile of darling corpses in the wings.

Comments
previousTake risks, support each other, tell the story.
nextLove Is the Law (The Suburbs)
WP2Social Auto Publish Powered By : XYZScripts.com