The inspiration of festivals (Part 1) 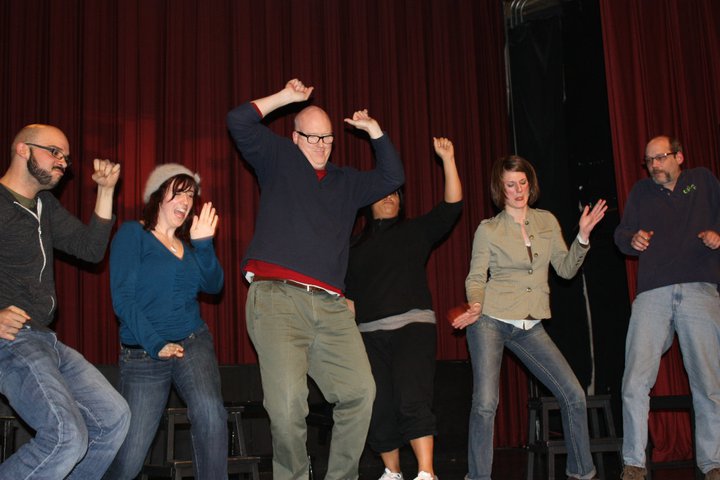 So I’ve had almost a week now to recover from performing in 14/48 this past weekend. “Recover” is an important word here, and has applied to all of my best festival experiences. The best have been unbelievably taxing on the body, while at the same time incredibly inspiring for the mind and spirit. A few brief notes on festivals in which I’ve participated:

1986 Edinburgh Fringe Festival: The grand-daddy of theater festivals. The year I went, the two productions I was in accounted for 1/400th of the total number of productions. Three weeks of shows, six days a week. The entire city is taken over by the festival, with many residents taking a vacation away from the city, financed by rentals of their properties to the swarms that descend. My two shows were “Oedipuss ‘N’ Boots,” a half-improv/half-sketch show out of Northwestern University, and “Moonchildren,” a Michael Weller play produced by Studio Theater Productions, out of New York City. Being part of this festival meant doing little else other than being part of the festival. My shows were at 11:30 at night and 10:30 in the morning in two different theaters. Time between shows was spent either eating, sleeping, or doing street theater (“really bad juggling from the worst country in the world”) on the Mound between three museums. Time after the 11:30 shows was spent drinking. A lot. Great reviews for both shows, a summer I’ll never forget (I turned 20 on the plane to London, where the New York company rehearsed before the festival), and a case of walking pneumonia at the end. The standard against which I’ve judged other festivals for years.

1991 Seattle Fringe Festival: I produced and ran sound for “Blight,” an original adaptation of a Stuart Dybek short story, for Northwest Passage Theater, of which I was a founding member.

1992 Seattle Fringe Festival: I was one of four actors in John Godber’s “Bouncers,” which was one of the festival’s darlings, routinely overselling each show (typically about 50 folks in the audience in a theater zoned for 35). I was also on the board of SFF that year.

1993 Seattle Fringe Festival: Re-mount of “Bouncers” in a larger theater. Typically had 100+ audience in a space meant for about 80.

1994 Seattle Fringe Festival: With Stephanie Roberts, co-wrote and co-performed “Almost Home” (with music by Rob Wittmer, pre-Awesome days, and direction by Scott Zeller), really a mash-up of two solo shows around the theme of home, and where people find it.

1995 Seattle Fringe Festival: Wrote and performed “Speakeasy,” a one-man show about four generations of cops turned bar owners in Chicago, starting during Prohibition. Could’ve been a lot better. I finished the script two days before the show opened.

2011 Seattle Festival of Improvised Theater: With Interrobang, performed “Interrobang Anonymous,” an improvised addiction support group (with the addiction unwittingly provided by the audience). Also got to do a mash-up performance with an all-star line-up: Jill Bernard , Ethan Newberry , Chelsea Binta , Mark Bratton, Michael Ferstenfeld, and Jennifer Cargill. Then a workshop taught by Asaf Ronen and another mash-up, this one with Joe Bill, Shira Wilson, Kris Corbitt, Alfonso Lopez, and Chelsea Binta. And partying. Almost matched Edinburgh in terms of inspiration coming out of it. (Was also sick at the end, though not to the same degree as Edinburgh.)

Partying is a surprisingly important component of great festivals, not because partying is fun (it is), but because that’s the time during which you get to hang out with a lot of people who share your same passions. This cannot be overstated. (The same holds true for great writing conferences. AWP Chicago in ’09, in many ways, fits my experience with theater festivals: eating, living, breathing the writing life, among others who share that passion, pretty much 24/7 for about five days.) It is largely because of the communication outside of actual performances that these festivals are so inspiring. And, to me, that was the largest failure of Seattle’s fringe festivals–there weren’t central gathering spots at which participants in the festivals gathered, and the scheduling of the festivals was such that it was only a few hours each day of the festival when its participants were in its clutches.

Hmm. That wasn’t very brief. And it didn’t delve much at all into the best parts of the best festivals–the people met, conversations had, and inspiration received. But there’s the foundation for some of what I was thinking heading into 14/48 weekend. Since I’m already over 700 words, which is just silly for a blog post, and I know there are hundreds more to write about 14/48 itself, we’ll call this “Part 1,” and I’ll start working on “Part 2” in a sec.